Leaving Oregon for the safety of Arizona.  On the trailer that I made from an old RV trailer are 25 angora goats.  It was a double decker.  The box part of the trailer had been a security barn that I made for goats.  I reduced the size so it fit on the flatbed trailer. Had it planned that way.  Big Benny the Great Pyr rode in the back of the trailer near the door, Dodger the dog rode in one of the vans.  The pickup and travel trailer were already on property in AZ.  My property in OR had already been sold and we were house sitting at this farm where we could pasture the goats.  The trip is probably not something most people would do, but we made it no problem!

Fall Leaves on Road.  The last 2 years I was in Oregon I worked as security patrol for a large tree farm.  Drove about 200 miles a day on the Calahan section.  It was a steady job which made for domestic tranquility. About that time I was also thinking about building up my SS retirement acct.   I appreciated the outdoor experience, beauty and opportunity to find edible mushrooms.  Saw elk, bear and wild mountain lions in their proper outback home.   Got to cover some of the same country that I knew when I worked for the state several seasons as wildfire suppression patrol.  I was active as a volunteer fire fighter in the years before that.  Could be a whole other story to tell.

I contracted with friend Bob Eggelston to haul logs on some jobs.  His single axle truck and trailer could haul quite a bit, and we got efficient scale by not having really long tapered logs. I always had the limbs trimmed close on the logs and tried to have little damage to the wood. Truck is parked in front of the old Camas Valley Store, across from the only restaurant in town.

This was my garden in the early 70's.

This is me cutting a cedar snag on one of those properties.  This dead tree was tall enough to possibly fall near the house across the creek making it a 'danger' tree. Dead  trees can be rotten and are more dangerous to work with for the cutter. I was able to fall it in a direction that did the least damage and away from the house and the creek.  I used proven techniques to get the tree down and in the direction I wanted.  Some procedures I followed are required by Oregon Forestry safety regulations.  I wouldn't have these photos except the ODF guys wanted to take them.  I guess because the tree was large and interesting.  It wasn't part of their official work. 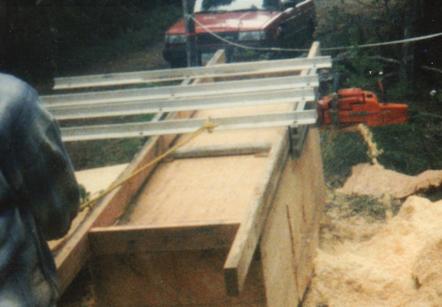 One of the timber thinning jobs was on a large tree farm owned by a UK company near Mollala.  We were stepping all over these mushrooms at work.  I had seen them all my life but didn't know they were safe or good to eat.  My boss's wife and some friends came up on the gated farm one morning with us and stayed all day picking the shrooms to sell.  I guess there was a fuss about that but it couldn't hurt anything as the fungus continues to live on underground.  Mainly, there just wasn't supposed to be anyone on the property except us workers.  I later was turned on to these excellent and safe food marvels and wish there were more down here in AZ.  I have found three types of edible mushrooms here at Hideaway Homestead.  Had some puffballs to eat this summer. 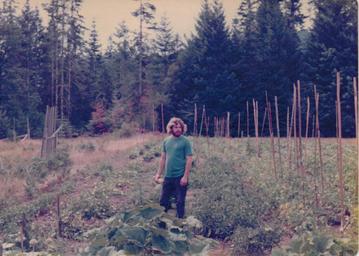 A load of long piling poles that I sent out from a local resident's tree lot.  These poles need to be made with certain specifications as to size, length and allowable taper.  I am good at doing that.  Properly prepared piling is worth more money than a sawlog.  Makes the thinning operation, which is good for the forest, better for the landowner and logging contractor (me, the logger).

I  worked for 3 landowners here at the end of this county road.  It was nice to have work in the same area so close to home.  There was a creek running through 2 of the properties, requiring me to get approval from ODF cut anything within the riparian zone.  This was a state regulation I could agree with that results in keeping the creek in the shade. 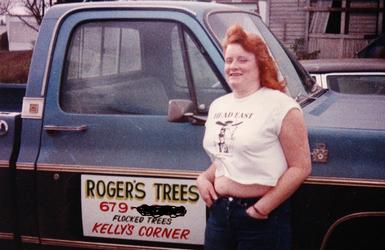 This is my tractor that I used for logging.  This job was close to my property so I didn't have to haul my "cat".  Actually an IH TD6.  I contracted to thin the landowner's trees for a percentage of the proceeds.  This must have been the last turn as it is not a very big load. 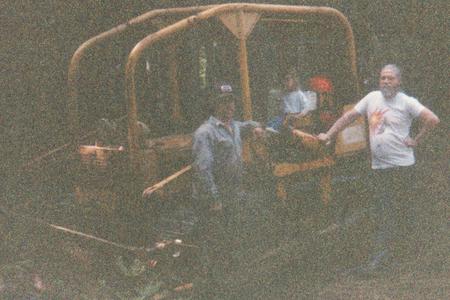 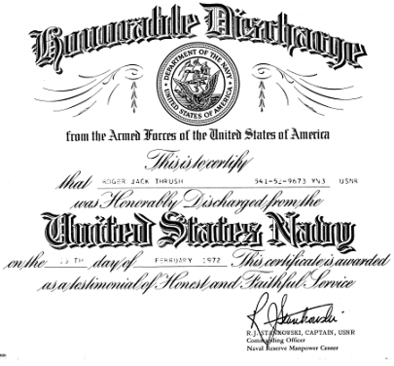 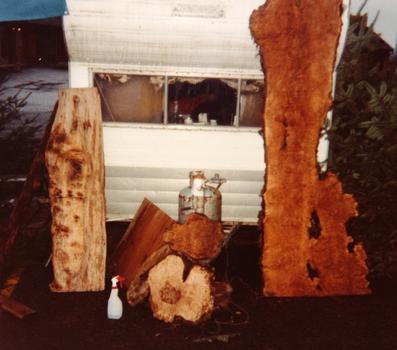 This is Kudos the Angora buck.  We had him in Oregon but sold him before we moved.  The cougars came from the woods behind this fence.  5 of them at night.  They killed and ate a young buck and then killed my angora doe.  Before that they must have killed 3 fawns that used to graze on our lawn with their mother.  The fawns disappeared one by one.  I saw these cougars at night when they all came back to feed on China the goat.  Never saw such brazen wild cats. Actually, before they multiplied, you rarely saw them. They multiplied because rich activists from the state to the south came to Oregon and changed the state constitution. More cougars has meant more dead cougars due to road accidents, livestock predation and other interface with humans since their range was expanded beyond normal. 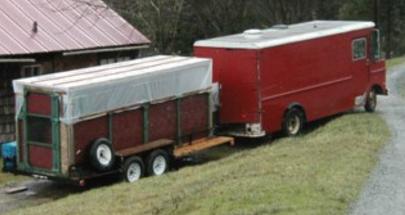 Now that I think about it, maybe these two men just wanted to be there with me when  the tree fell.  I did work alone which freaks out some people but was not against the law for a sole proprietor. This tree had a lot of a type of dry rot so was not that valuable.   This was Incense Cedar which is used for pencils.  I guess it could have been used to make a million or so pencils.  Or peckey cedar fencing.  I loved my job. 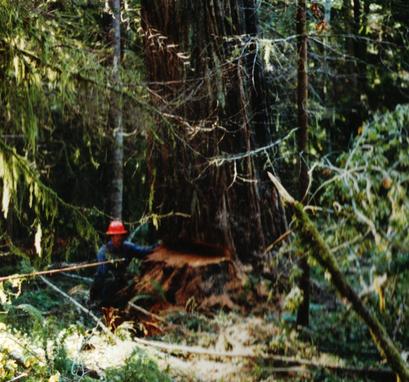 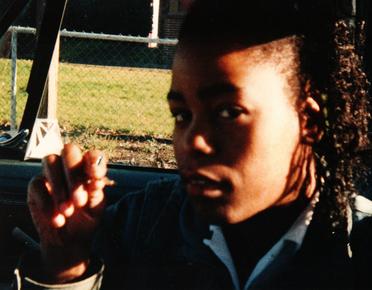 This page is about me before 2004 when I moved Hideaway Homestead to Arizona.  Any reference to 'we' relates to past events, now there is only 'me' unless I am referring to my animal friends and me.

Same job as above.  Not  a good pre-digital photo, but we could pretend it was foggy.  I wanted to get little Elena, fresh from Romania, in the story. 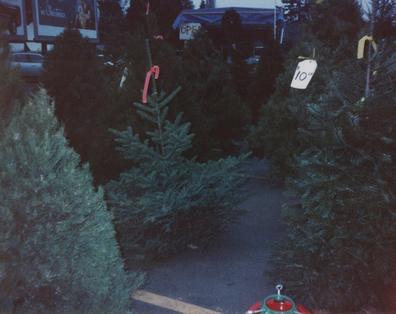 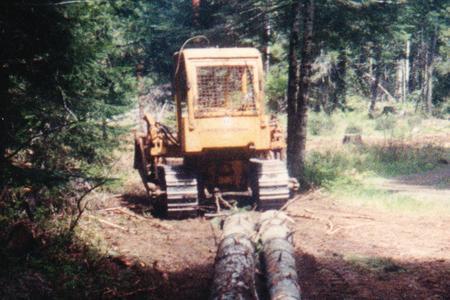 More likable Oregon youth could be discovered in Portland.  I tried selling Christmas trees one December when I was in that area.  I also finished another year of college while living and working there.

1994. I bought a dead sugar pine tree from BLM adjacent to my property and dragged the logs about hundred feet onto my land.  Good thing the wood was bug eaten; if not it would have been very expensive. Here I have set the saw throttle open with a clamp and we pulled the mill frame along with a rope.  This made extra wide boards that you couldn't buy anywhere.  I had made this Alaskan Mill frame about 20 years before this, wish I had brought it with me to Arizona.  I do still have the Husky 181 saw. 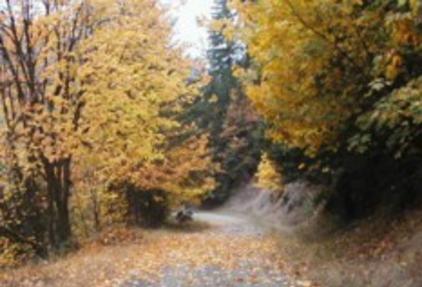 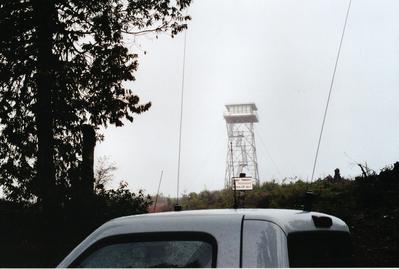 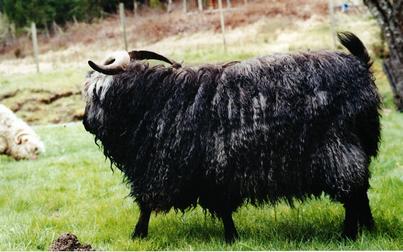 At one point I went to northern Oregon and worked in the woods  as a timber cutter.  One job was in the Mt Hood National Forest and we stayed in Gvt. Camp.  Part of the reason I was there was to try to get closer to my only son, a teen who lived in LO with his mother.  Work  was at times intermittent so I went to town and worked as the security officer at the Portland Saturday Market.  It was a fun change and I learned a lot about what went on.  When you walked along the downtown streets, there were piles of cubed glass along the curbs.  It was from car (belonging  to mostly tourists) smash-ins.  The cops said they did manage to catch 10% of the smashers.  Oh joy! 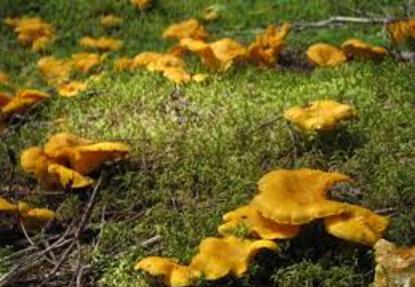 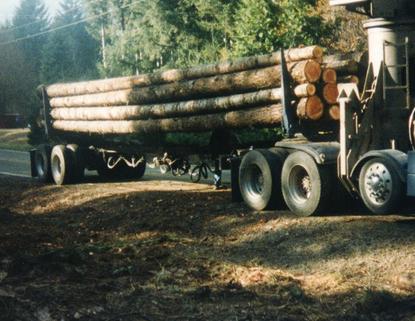 I guess  I was sort of an entrepreneur.  These are burl slabs that I had for sale on my tree lot that I had cut with my Alaska mill. Looking back I could have been a much better business person.  I did have freedom which is no little thing. That time of the year there was often no work in the woods which can be seasonal due to weather.  I usually made enough money with a tree lot to hold me over for a while.  It was a good time to meet up with new people too, and party some.  It was a lot of work and I stayed very busy every December. 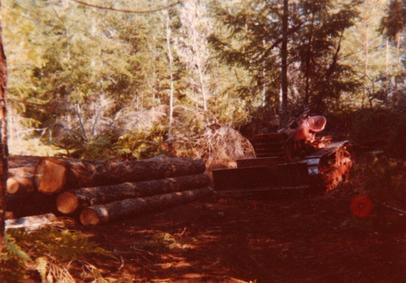 I sold Christmas trees in my county seat for many years.  I'm from a valley that has many tree farms, and I could get deals on trees, usually cutting them myself.  That way I had fresh trees for the customers.  I stayed on the lot in my little camp trailer. 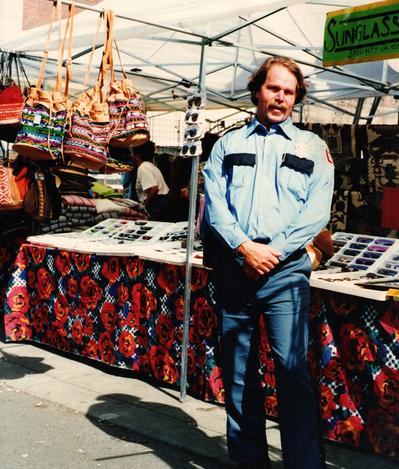 This timber harvest was about 20 years earlier on property that I ended up with as part of the deal.  The Oliver OC3 crawler tractor is very small but could do the job if you knew how to use it.  I could stack logs with it as you can see.   It is narrow so was good for getting in between young trees without doing damage to the next generation.   I was careful about saving the young trees when felling the bigger ones, and when dragging the logs.  You could see the difference when I was done, as compared to how some people would do it.  I learned to do all of this work when my cousin hired me to work for his logging company after I came home from the Navy.  It was a 65 year old man who trained 25 year old me as a cutter. 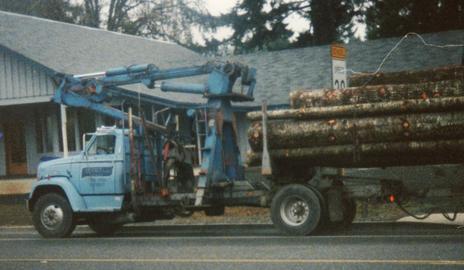 My tree lot early 90's.   I sure loved that truck while I had it.  Gina is alright too. 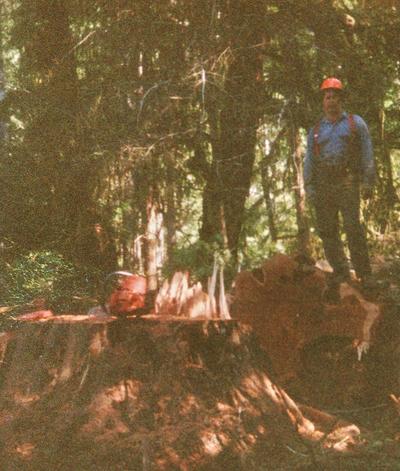 I worked for a Forest Protective Association for 2 summers as a State Fire Warden.  My 2 younger crew members and I manned a 4x4 brush rig and were on duty to respond immediately to wildfires.  At times exciting and in between, boring.    Got on some fires before they could get out of hand.   This was often during periods of extreme fire danger.  Part of my job was to write burning permits for burn barrels, etc.