Fresh veggies from my garden. August 2020

I do have a tractor here now.  First wheel tractor I ever owned.  I did learn to drive an old Johnny Popper as a kid on the farm.  I might be able to get another dozer some day once I secure complete ownership of this place.  I had 6 different crawler tractors or dozers in Oregon.

Globe Mallow.  Spring brings color to yard.  This plant is edible.  You might want to cook it first as the leaves are fuzzy and will tickle your mouth.

View from my homestead December 30, 2014.  The southwest facing slope doesn't have as many juniper or pine trees as the more northern facing hills.   The cattle belong to the greater ranch that surrounds my parcel.  The livestock graze on about 50 square miles of open range, made up of Arizona state trust land checkerboarded with private parcels of various sizes. Some parcels are up to one square mi. but most are +/- 40 acres.

Below - 2 days and 16 inches of snow later.  I created the clearing inside my fence by removing scrub oak and other brush.  I have fenced 16 acres of the 61 acres to keep my animals contained and keep the other livestock and coyotes out.

I had learned continuous strand weaving on the triangle loom in Oregon.  Here in Arizona I started making triangle looms for sale.  I heard of continuous weaving on the rectangle pin frame loom so tried making one.  Couldn't find the formula for making the loom with longer multiples.  Tried to figure it out but gave up for a few years.  Picked it back up and did figure out how to do it for any length loom and have it come out perfect.  Came up with a better weaving procedure too. Now my plans are used all over.  This photo sent by a customer shows scarves made on looms made with my pin arrangement formula and weaving done with my weaving method.

Green lizard in garden #1.  He seems to be a friendly reptile neighbor.

Bringing home the first 2500 gallon water tank.  I thought this is how all homesteaders get their stuff.  The tank only weighs 200 lbs so was not a heavy load.  It did have a lot of surface to catch air so I had watch the high speeds on the highway.  A manager at the truck stop where we both worked actually saw the load going down the freeway and thought it was hilarious; in a snarky way.  That's OK, he probably doesn't have his own water or water tank.  That is Snow Mountain in the background.  Looks like a mesa but is a 6000' high ridge.  I walked up there once to check it out.

My son Cody came to visit and helped put the stain on the exposed beams for the house.  The travel trailer that we stayed in can be seen in the background.

First beet crop 2017.  These were harvested in June.  I made sun-dried beet chips from these golden beets.  That is a softball in with them.  I find I am able to get 2 or 3 beet harvests in one growing season.

I had chickens for a while, this one found a warm place to sit.

I can have an early spring garden and root crops like the carrots will be good all through the winter freeze.  The Aquarius Mountains  are so named because of good springs and wells.

I planted spinach to try a late fall garden. It was warm at times this winter and it took off.  I can pick off the newer leaves for cooking or raw for sandwiches.  I left some lambsquarter with it and it also survives frost and snow.  I can cover the plants with panels if it gets any colder.  There was 18" of snow on it a month ago.  Looks like I can have fresh spinach until it goes to seed.

Before I could build my house I had to put in a permitted septic system.  I rented a backhoe and did it all myself.  I hauled the required drainfield rock about 50 miles in my 3/4 ton pickup.  When I brought home the septic tank and slid it out of the truck (by myself), it bounced and landed in the hole but was pointed in the wrong direction.  The solution was to parbuckle it back out of the hole so I could spin it around and get it back in the right position.  Backhoe was gone so this was all done with hand winches and rope.  Photo shows the tank part way out.  Learned this trick while working as a logger in Oregon.

I am trying to be more self-sufficient, the last few years I had chickens for free range eggs for me and a few neighbors. I can do more to make my own food, it just takes hard work and intention.   I have gardens and several deep raised bed grow boxes.  In the photo below are Jenny and her daughter Gidget.  Gidget went to live with a neighbor when she was old enough, where she got to be friends with several horses.
Originally we had angora goats here.  After that changed, heavy monsoon rains made for tall grass and weeds.   I again brought some grazing animals to this farm in order to keep the grass and weeds down that come with the seasons.  The tall grass in the 16 acre fenced area dries out later and is a big fire hazard.   The goats and donkey grazing will make the farm look better and be safer from wildfires.

First thing I did with the tractor was clear some scrub brush.  I was able to pile up the brush and roots with very little dirt.  The area back by where the tractor sits is now my softball field.  No one has played softball there yet but Jenny likes to roll around on it.

My view of off-grid electricity from where I sit.
My homestead is in a remote location which doesn't have a power grid.  This is the case with thousands of properties in this region, across North America and all over the world.  With modern technology such as solar panels, deep cycle batteries, cell phone systems, satellite internet and TV, this is not a problem.  Those with home power systems aren't subject to grid  failures so actually have a security that people on the grid don't have.
The solar panels you are seeing on rooftops that are mostly grid-tied  provide power to the grid when the sun is bright, and these homes receive power back from the grid. But when the grid goes down these people are out of power like everyone else on the grid.  People don't necessarily know this when they sign up and get all the subsidies and tax breaks.
I can see the glow in the sky at night from the Phoenix area maybe 150 miles away.  All that energy to make this light, and the energy for air conditioning and other uses at night comes from sources other than solar.  Until they invent a way to store energy for massive systems, solar  can only provide at a maximum the percentage of energy that is used during the day.  If you want 100% solar and wind, figure a way to have the grid shut down at night and on cloudy days and have the people be OK with using their grid energy only when it is available to them.
Part of the plan is to use other sources than electricity for such things as cooking and heating water and house heating. Energy efficiency is what makes an off-grid home system affordable.  You can buy a big, expensive system but just the battery replacement cost means the on-going expenses will also be costly.
I did have a page on affordable alternative power, HERE it is as a pdf file. This is not a webpage, links there don't link.

The cabin back when I had satellite internet.  The metal shutters on the south windows can be closed during the parts of hot days when the sun's rays come in.   In cold weather I want the sun's heat coming in.

When the heavy monsoon rains come, it's like a second spring season.

March 16, 2021.  I am still hunkering down here at the homestead until things resolve.   I decided to stay up here on the mountain for longer periods of  time so I don't have to worry about catching the virus.  I am well set up with provisions, dog food, etc.   I have always had a good immune system so maybe I shouldn't worry.  Easy to say, but I am in the older age category they talk about.  The more I isolate, the less I have to worry about.

I am cutting down on making large triangle looms because I have had problems getting the used carpet tubes to ship them.  I am done asking for them, to buy or for free.

I like to keep busy, but I am semi-retiring at 75 this month.   This winter I kept active firewood cutting.  In the summer I did  more gardening. I dried lots of veggies which is easy to do when it is hot and dry in the summer.  I have late fall planted spinach still fresh in my garden as of today, March 16, 2021. 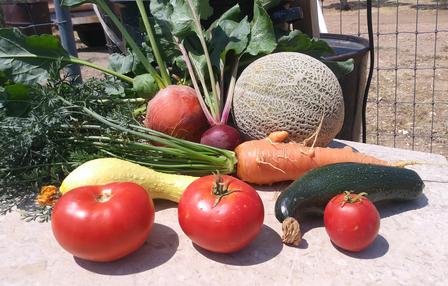 I started building the house after living in a travel trailer for more than a year.  Could have started earlier but there was a fall and winter season of heavy rains so the roads kept washing out.  I worked on it full time so I thought it went as fast as possible.  I wanted it made well so worked through the stages methodically.  It was never fast enough for my gf.

Eastern view from the deck.  The windturbine doesn't add much battery charging but it goes for a spin sometimes.

When they were pups.  The mother dog had just the one litter, then died a year later.  She lives on in Doolan and Dalton. 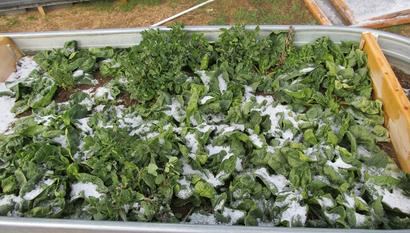 A few years ago I planted some domestic amaranth seeds I had ordered online.  It was quite a show in my little garden by the house.  Some of these are grown for the 'greens' in Mexico.   There are wild amaranths that come up here with the monsoon rains. AKA pigweed.  They are all considered weeds but some are better to eat, like Palmers Amaranth, the 'tree spinach'.